Here are four more hoppers I've been working on. The HLMX #5038 was built from an undecorated Bowser 100 ton 3 bay hopper kit. CSX in the late 1980's-early 1990's was leasing just about any hopper they could find so I'll be building a few. This car has 44 individual decals using a Microscale Gothic number and letter sheet, plus a data sheet. CSX #815662, one of 1500 built between 1975-1976, was modeled using the same Bowser undecorated kit and I used the decals from a Microscale CSX hopper sheet. Unfortunately the Microscale sheet doesn't have all the necessary decals to finish the car correctly, so at some point I'll go back and add a shop date and the car classification (I just wanted the thing off my workbench). I am also excited with the news that Steel Valley Models is apparently going to produce hopper decals for CSX in the next couple of months. That gives me a reason to get several hoppers painted and ready.

The L&N and B&O hoppers were decorated kits but I've added a few extra decals such as new consolidated lube plates, ACI plates and data. I even got photo-bombed by a cow. This phone pic. was taken on a section of the upper level of the layout and as you can see the scenery and backdrop is minimal. 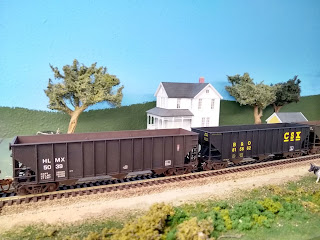 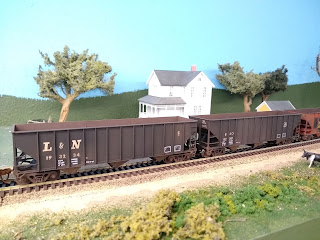