Most of the benchwork is in, including the new peninsula. I used 2x4's for most of the peninsula, they were half the cost of 1x4s. They sit on top of L girders made from 2x4's. They will also support the lower level. I can now park my truck on this thing. Thanksgiving morning was spent putting down the new plywood. The helix also has been installed, this was from the old layout.
With the plywood down I started laying out the new staging yard which will be under the lower level.  On this layout there will be more clearance between the staging level and the lower level, something I couldn't stand on the last layout.  Also, this staging yard will have 7 tracks, 5 of which are attached to a reversing loop so trains can be recycled at any time.
After a year and a half it's great to see track going down! 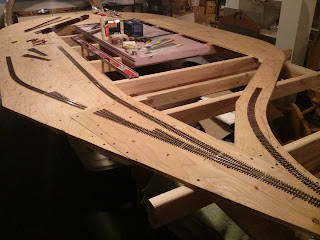 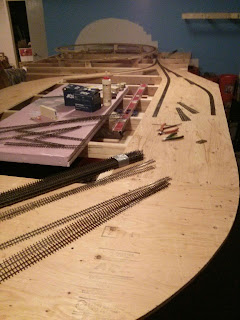