What says "I'm a narrow gauge train nut" more than your very own narrow gauge switch stand?  This stand is off the D&RGW narrow gauge 4th division. It's a bit odd as it has two targets, not just the red one. Joanna Miller of Caboose Hobbies tells me this came from Durango. Apparently Duane Miller's step dad got this from the railroad in the 1960's.

How cool is that!

The lamp on the top has been modified so it can light up.  Some of the kerosene parts have been replaced by a 60 watt light bulb. While it's not original, it makes it much easier than pouring kerosene in when I want it illuminated.  It also has an Adlake lock on it that takes a Rio Grande switch key.  My plan is to run new wiring to the lamp and to install an outlet behind it on the house with a switch.  It should make a great conversation started when sitting out on the deck in the evening. 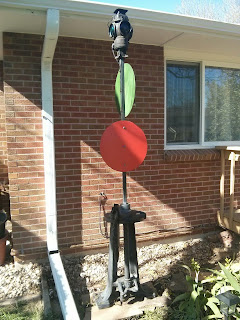