I've started laying out the track for the mill that is at the end of the branch on the upper level. I've decided to build a module that can be set into place instead of standing on a footstool. Here are two photos of the progress.
The first photo shows the three way stub switch I built on Thursday afternoon. I decided to use a three way switch at the beginning of the track work so as to make everything fit. No I didn't use a fast tracks jig, I built it with PC ties and rail using my own templates. I will say that my Hottip soldering station was awesome for this! 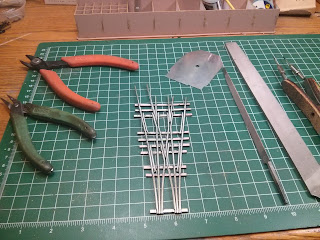 The second photo shows the module in progress. I can now sand the roadbed and start laying track. The entire upper level of the layout uses flex track and hand laid turnouts. (I've hand laid three complete layouts in my lifetime, I'm not doing a fourth). However, the entire yard on the lower level will be hand laid. 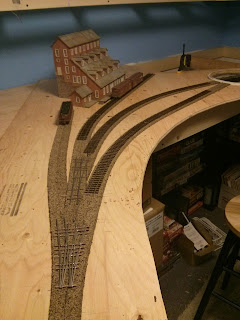 The module isn't very big and since there isn't room for a switch on the end of the siding I'm using a turntable to both turn the locomotive and act as a switch. For operations, a five car train will enter the module, take the siding on the right with the locomotive pulling on to the turntable. The engine will turn, runaround the train and proceed with switching the mill, starting by shoving the caboose on to the turntable. The mill has a three to four car capacity. The side track will hold a gondola of coal for power and heat, plus there's enough room for the occasional reefer of beer for the miners.

I picked up this Micro Engineering HO scale Grogers Grocery kit for nothing! To make it work for S scale I simply replaced the doors with Grandt Line S scale commercial store front doors. I could have also replaced the windows on the sides but I thought they looked fine.
Instead of using the goofy looking brown shingled roof that comes in the kit, I wanted to add tar paper that I make using newspaper spray painted black, a trick I learned from Jon Addison. However, after unsuccessfully searching high and low for my stash of tar paper, I ended up just using masking tape instead. Once the tape was on, I masked everything on the building and air brushed flat black on the new roof. I also went ahead and used masking tape for the window shades like my brother and I used to do when we were kids.
The kit comes with all the main parts of the building molded in white styrene, I chose to paint it SP lettering gray with white trim. After adding some chalks for weathering I think it turned out pretty good for what will essentially be a background structure, especially considering I got it for free. But I'd still like to know what happened to all my tar paper! 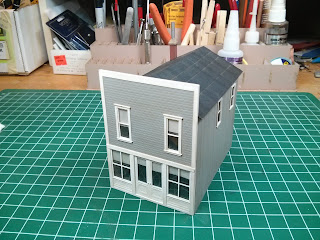 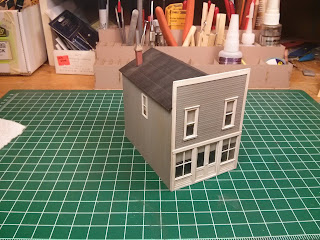 Posted by Jakes Creek at 9:29 PM No comments: