Here are two of the latest hoppers to make it to the layout. C&O #69415 was built from an undecorated Bowser 100 ton 3 bay kit using a combination of Steel Valley Models decals plus a Microscale ACI decal. B&O #66393 was built using the same kit, with decals from Steel Valley Models and K4 decals.

In 1971, the B&O bought 2,500 100 ton 3 bay hoppers from the C&O. These were numbered 66000-66999 and 82500-83999. A photo I found on rrpicturearchives.net shows another hopper from this same class that still has the "For Progress" logo on the side. I don't know if other cars in this class got the same treatment, but I thought it looked really cool to have a B&O hopper with a "For Progress" and Chessie System logos.

All of the freight cars on my last HO layout had the trip pins removed on the Kadee couplers, cut levers and air hoses. I've now started adding cut levers to my rolling stock, however I've been reluctant to add air hoses as I was constantly replacing them after operating sessions. Since I don't have any levers such as the ones from Detail Associates, I simply made my own from .12 wire. 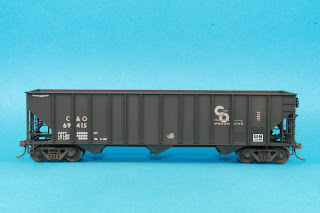 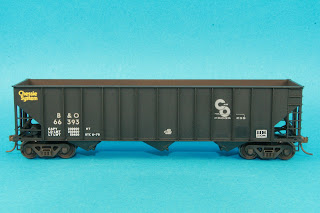 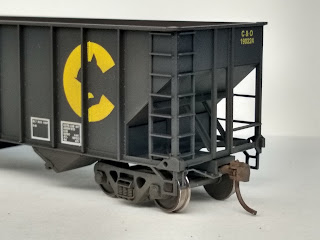