I've gotten into the habit of having 3-4 hoppers in various stages of completion on my workbench. After a trip back to Kentucky last week, I got inspired to finish this one.
L&N #193247 was one of 200 cars built by Bethlehem in 1971. While it was originally painted orange with black lettering, in the late 1970's-early 1980's most of the class was re-painted to the scheme shown here.
Again, starting with an undecorated Bowser 100 ton 3 bay hopper, I added cut levers and Evergreen Styrene angle #292 to match the prototype. The decals I used were originally produced by Islington Station. These were obtained through friends in the L&N Historical Society. 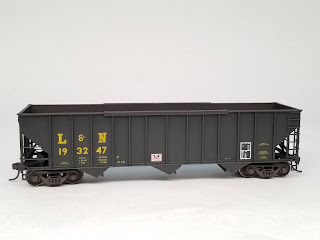 Here's a photo of one of her sisters taken by Jeff Weaver in 1992. 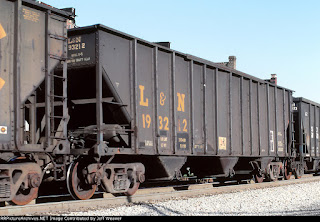